The Earth's crust is primarily composed of melting products from mantle plumes and mid-ocean ridges - both presently and over the course of Earth history. While both systems represent upwelling features in a convective mantle, they can be viewed as end-member systems in that plumes represent buoyant flow whereas mid-ocean ridges represent passive corner flow. This paradigm is not strict - flow beneath ridges may be buoyant in some places, for example, but it does provide a reasonable
framework for enquiry.

Plumes and ridges can be studied independently, but in many places across the globe the systems interact, often in intriguing fashion. The nature of these interactions provides an opportunity to improve our understanding of both systems, and provides new perspectives on the mantle, crustal, and water column processes associated converting heat from the Earth's interior into new crust, hydrothermal flow, and biological communities on the seafloor. 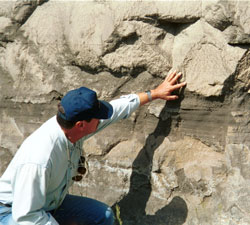