This year’s study tour visited Northern Ontario, an area within the Canadian Shield or Laurentian Plateau. The Canadian Shield is a U-shaped region of ancient rock, the nucleus of North America, stretching north from the Great Lakes to the Arctic Ocean. Covering more than half of Canada, it also includes most of Greenland and extends into the United States as the Adirondack Mts. and the Superior Highlands. The first part of North America to be permanently elevated above sea level, it has remained almost wholly untouched by successive encroachments of the sea upon the continent. It is the earth's greatest area of exposed Archaean-age rock; the metamorphic rocks of which it is largely composed were probably formed in the Precambrian era. Repeatedly uplifted and eroded, it is today an area of low relief (c.1,000-2,000 ft/305-610 m above sea level) with a few monadnocks and low mountain ranges (including the Torngat and Laurentian Mts.) probably eroded from the plateau during the Cenozoic era. During the Pleistocene epoch, continental ice sheets depressed the land surface, scooped out thousands of lake basins, and carried away much of the region's soil. Drainage is generally very poor on the shield. The southern part of the shield has thick forests while the north is covered with tundra. The region is largely undeveloped but has great water-power potential and is a source of minerals, timber, and fur-bearing animals. The trip began in Sault Ste. Marie and ended in Sudbury, Ontario, which is part of a large geological structure known as the Sudbury Basin, believed to be the remnants of a 1.85-billion year old meteorite impact crater. 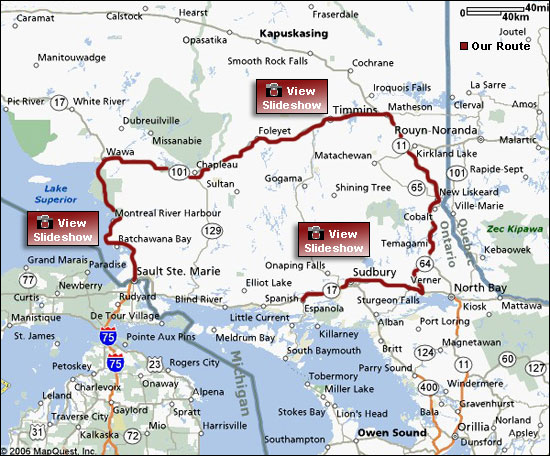