2013 Geodynamics Program
EXPERIMENTS: Simulating The Earth In THe Lab

The theme of this year's Geodynamics Seminar Series is "Experiments".  For the field trip we will be traveling to Clermont-Ferrand, France to visit the experimental facilities at the Laboratoire Magmas et Volcans which is one of the top high temperature/pressure experimental laboratories in Europe. It also boasts an exceptional location: situated at the foot of the soon-to-be UNESCO World Heritage site “Chaîne des Puys”, comprised of a series on monogenetic volcanoes, formed between 70,000 and 6,000 years ago, as well as the Limagne Fault, which forms the western edge of the Limagne Graben. Led by geologists from the Laboratoire Magmas et Volcans, we will wander the wonders of the Massif Central. In particular, students will learn about the Chaîne des Puys, which hold a prominent place in the history of volcanology because its volcanic features played an important role in settling the late 18th century controversy regarding the origin of basalt (i.e. Abraham Werner and the Neptunists vs James Hutton and the Plutonists). The volcanoes form a N-S-trending chain of basaltic and trachytic cinder cones, basaltic maars, and trachytic lava domes that has been active into the Holocene. Construction of the present-day Chaîne des Puys began about 70,000 years before present (BP), and was largely completed by the beginning of the Holocene. Holocene eruptions constructed lava domes such as the Puy de Dôme, whose growth was accompanied by pyroclastic flows, cinder cones that fed lengthy lava flows, and maars. The latest well-documented activity took place about 6000 years BP near Besse-en-Chandesse and included the powerful explosions that formed the Lac Pavin maar. Students will also learn about the tectonics of the intracontinental rifting that formed the Limagne Graben, which is downthrown from the Massif Central by a series of normal faults. The graben contains about 2 km of sediments, and the amount of crustal stretching is estimated at 1.2–1.3. Rifting began in the Late Eocene and continued into the Late Oligocene. It is part of the European Cenozoic Rift system, which includes the Rhine Graben, which formed in response to compressional deformation of the Alpine foreland.

On the return trip from France on July 1, we will briefly visit Iceland to take a small trip out onto the Reykjanes Peninsula to see where the Mid-Atlantic Ridge rises out of the Atlantic Ocean, and where we can walk across the Leif the Lucky (or Miðlína) Bridge, which spans the Álfagjá rift valley (60 feet wide and 20 feet (6.1m) deep), and marks the boundary of the Eurasian and North American tectonic plates. 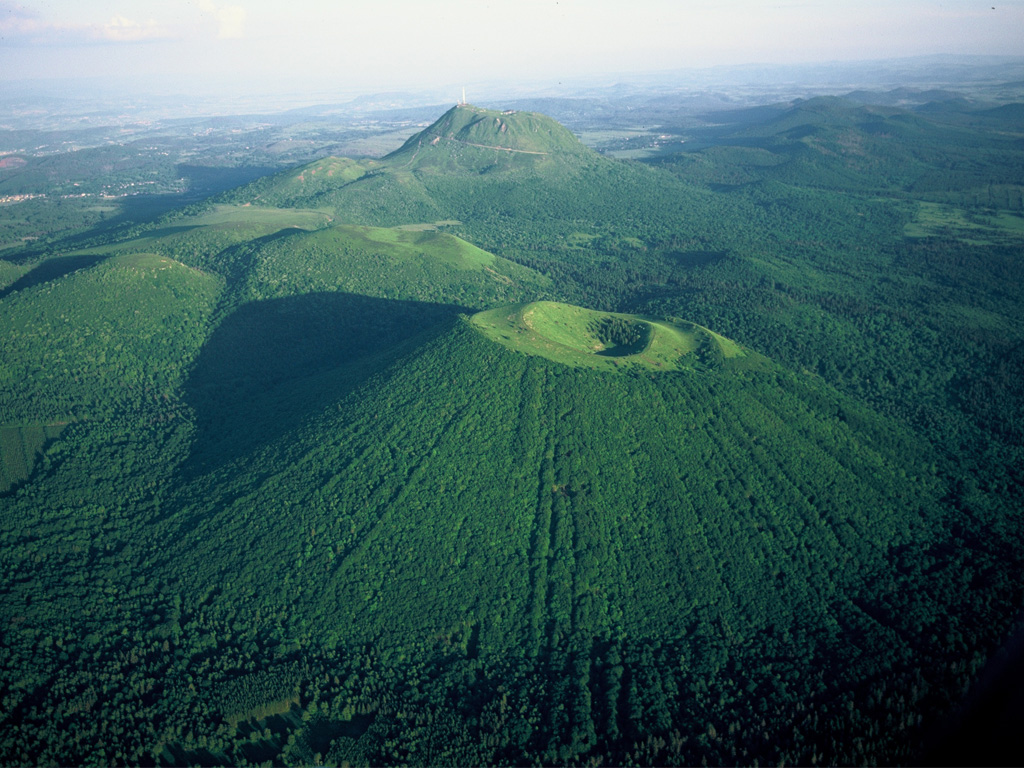 The Chaîne des Puys is a north-south oriented chain of cinder cones, lava domes, and maars in the Massif Central of France.

2013 Geodynamics Program
EXPERIMENTS: Simulating The Earth In The Lab

Pre-generals students are required to carry out a research project related to this year’s theme - preferably something outside their current field of research.  They will be required to write this work up in an 8-10 page report, due at our last class meeting.  In addition, they will give a 12-15 minute oral presentation at the end of the course, reporting the results of their findings.

Some project ideas will be solicited from seminar quest speakers, WHOI staff and falculty and posted below in the first few weeks of the semester.  Please notify this year's science organizers of your project topic.

Subduction-derived fluids induce hydrous melting in the mantle wedge. However, peridotite residues of hydrous melting could be essentially dry because water escapes with the melt. Here we propose to trace hydrous melting through the partitioning of fluorine (F) and chlorine (Cl), two elements that are very sensitive to the presence of water during melting (Dalou et al., 2012). The study will combine SIMS measurements on natural rocks and existing experimental charges, literature compilation on arc basalts, and experiments in the laboratory are also a possibility.

Recent models on subduction zones suggest intense mixing at the slab-mantle interface and transport of the mixed materials ("mélange") in diapirs into the source region of arc magmas (Marschall & Schumacher, 2012, Nature Geoscience, 5: 862–867). The envisioned experiments will use a high-pressure/high-T apperatus to produce melts from mélange rocks and determine their composition to test whether some types of arc magmas could be produced by mélange melting in the mantle wedge.
Supervision: Horst Marschall & Glenn Gaetani