This year study tour will be to the Fraser River watershed area in British Columbia, Canada.  The Fraser River is the longest river within British Columbia, Canada, rising at Fraser Pass near Mount Robson in the Rocky Mountains and flowing for 1,375 miles (2,213 km), into the Strait of Georgia at the city of Vancouver.  It is the tenth longest river in Canada.  The river's volume at its mouth is 112 km³ (27 cu mi) each year (about 800,000 gal/s or 3550 cubic metres per second), and it dumps 20 million tons of sediment into the ocean.  The river is named for Simon Fraser, who led an expedition on behalf of the North West Company from the site of present-day Prince George to the mouth of the river.

Olivier Marchal and I have been working on the spreading of freshwater into the ocean, and here is a simple project for a student to do.

Take a cylinder of covered rotating salt water (with an air gap between the cover and the water surface) on one of our turntables in the GFD labs and introduce a steady flow of fresh water at the outer radius top of the fluid.  We want to know how long it takes for the entire surface of the salt water to be covered with fresh water.

Theory has been developed and there is possibility of including some numerical modeling with fortran as well.

Runoff from glaciated Greenland has been estimated at rivaling that of a large river draining into the Arctic.  The geochemistry of waters draining Greenland, specifically that of strontium, is not well known.  Samples of opportunity provide first insights into coupled major and trace ion, and Sr isotope composition.  Interested students will be preparing samples in a clean lab, learn how to use the single and the multicollector ICPMS to acquire geochemical data

This project involves analysis of data acquired from 5 tilt meters deployed around the Lone Star geyser over a 5-day interval in September, 2010. The tilt meters were deployed to measure ground-surface displacements caused by sub-surface pressure gradients associated with the geyser eruption cycle (2-3 hours). Coherent signals in the time series data can be used to constrain the depth, size, and shape (e.g., ellipsoidal vs planar) of the sub-surface pressure perturbations generating ground displacements. This is all very new and exciting but tilt data are noisy in the best of circumstances, so some signal processing is required to identify the coherent signals between stations.

In order to complete this project in the necessary time frame it is essential to have some signal processing experience, and spectral analysis in particular. The data have already been pre-processed and so are more or less ready to be analyzed. We will use Matlab, and we will start out with a good selection of pre-existing scripts I wrote for analysis of the same kind of data from an earlier pilot study. These scripts will need to be modified a bit to work with the new data, so experience programming in Matlab is also a must.

No one has ever measured the time-space patterns of ground deformation around an active geyser, before, so this project is by definition exploratory in nature.  It might all come to nothing, or it could lead to a Nature paper! The project will also require some collaboration with scientists at USGS Menlo Park, who led the overall project, which included a variety of other time-series and survey type data. I can describe things to anyone motivated/interested enough to ask for more details.

Two thousand years ago, ships trading with the Roman province of Iberia sailed the Ebro River high above the mouth; apparently no delta existed at the time to hinder navigation.  This is the legend; new cores from the delta will put it to test.  One aspect of this project, open to interested students, seeks to understand the role of deforestation and agriculture in arid regions on coastal evolution.  This will involve analyzing geochemical tracers of ancient human activities (i.e., biomarkers as well bulk and isotopic composition) and correlation with fluvial dynamics (i.e., river discharge and sediment load reconstructions).

High-resolution records of Indian monsoon variability are paradoxically missing for the densely populated Indian Peninsula; instead records marginal to the monsoon domain are used as “proxies to proxies”.  Thus the history of the Indian monsoon system, its driving mechanisms, and its impact on ecosystems and human civilizations remain controversial.  An ongoing effort to remedy the lack of records includes foraminifera-based reconstructions of river-driven surface salinity in the Bay of Bengal; interested students are welcome to inquire.

Measurements of the isotopic composition of Mg in the world's major rivers have demonstrated the existence of a 2.5 per mil range created by both heterogeneity in the source rocks and isotope fractionation during weathering. Further, the flux-weighted average of the Mg istope composition of global runoff has been determined to be distinct from that of seawater.  The fractionation of Mg isotopes between water and carbonate minerals is thought to play an important role in creating this isotopic variability.  The goal of this project is to experimentally precipitate calcite from aqueous fluid in the laboratory under controlled conditions to determine the fractionation factor for Mg isotopes over a range of temperatures.

Spatial Characteristics of Tidal Channel Morphology. Occupying the transition between land and ocean, tidal mud flats are common where tides are large (>4m) and a source of fine sediment exists, either locally or distally from a river. Although these features share characteristics with terrestrial river networks and appear to be enticingly ‘fractal’ across some scales, there are few quantitative studies of their characteristic scales and scaling properties. Students participating in this project would use either plan-view aerial images or lidar data to extract channel networks and analyze their spatial structure using signal processing techniques (fourier transforms and wavelets). A goal will be to determine how these characteristics may change across environmental gradients or between geographic locations. The main tools employed would be GIS and analysis in Matlab.

This project entails developing a MC-ICPMS method for measuring radiogenic AND stable strontium isotopes, and testing the method with standards and water samples from the Fraser River.
(Rene Boiteau has signed up for this) 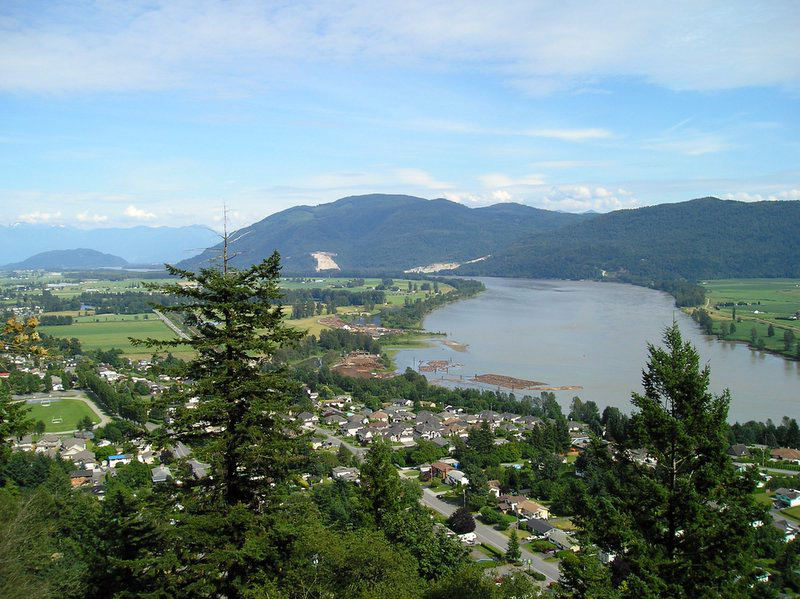 View looking east on the Fraser River, near Mission, BC. The Mission "suburb" of Hatzic is in the foreground. Viewpoint is the cliff at Westminster Abbey.