This year's geodynamics field trip went to the Pacific Northwest to visit the sites of numerous past "Catastrophic Events" including volcanic eruptions, tsunamis, earthquakes, lahars and pyroclastic flows. This region allowed us to visit examples of nearly all the types of catastrophic instabilities that speakers discussed during the semester.

SHARE THIS:
The field trip to the Pacific Northwest was led by Jeff McGuire, Greg Hirth, and Karen Hanghoj from WHOI. Brian Atwater from the United States Geological Survey (USGS) led the excursion to the muddy realm of Lynch Cove in Puget Sound. The complete list of participants is below: 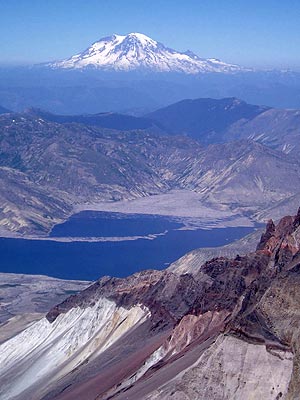 View of Mt. Rainier from the slope of Mt. St. Helens. (Photo by A. Michel, Woods Hole Oceanographic Institution)

Joint Program students enrolled in the Geodynamics seminar are required to complete a project for the class. This includes research, an oral presentation during the last two or three seminar meetings, and a written paper due at the end of the semester. For first and second year students, the project must be on a topic related to the theme of the seminar and must be different from their main research interest. For more advanced students, the topic may be closely related to their dissertation research.

The following topics are suggested as potential student projects (advisor listed in bold):

Stress Triggering Analysis of the 2002 sequence of 4+ M>5 earthquakes on the Gofar Transfrom Fault (EPR) within a span of 15 minutes. These events may have rupture a series of adjacent strands of the Gofar transform, which makes the geometry interesting for evaluating stress triggering models.

The NOAA t-phase catalogs indicate that the Quebrada, Discovery, and Gofar transform faults on the EPR have the highest rate of foreshocks in the 1000 s before large (M>5.5) earthquakes of any oceanic transform fault. However, because of the acoustic nature of the catalog it is difficult to evaluate whether the likelihood of a foreshock increases with the size of the eventual mainshock, a result that would have profound implications for earthquake nucleation. This project would use a Rayleigh wave based match filter to determine the seismic moments of many of the "moderate" magnitude M4.5-5.5 events that are neccessary to evaluate whether foreshocks are more likely before big earthquakes than moderate ones.

Interaction between earthquakes at oceanic transform faults and mid-ocean ridges.

Catastrophic Volcanic Controls on Climate Change in the Middle Miocene.

Statistical analysis of the fossil record of Mass Extinctions.

TALKEETNA SAMPLES
Thermobarometry in peridotites and pyroxenites from the base of an arc crustal section in south central Alaska, via electron probe analysis of mineral compositions. Thermobarometry of gabbroic samples in the same section, plus data from the analogous Kohistan arc section in Pakistan, show that Moho temperatures are ~ 400°C hotter than predicted in any arc thermal model. There is some question about whether these are cooling temperatures set during the waning of arc activity, contact metamorphic temperatures, or cooling temperatures set during igneous rock solidification. Temperatures from residual peridotites and cumulate pyroxenites will help to resolve these questions. Rhea Workman did a few last spring. You can talk to her about her results. An ambitious student could help with theoretical development of a "new" plagioclase-olivine-pyroxene-spinel barometer, to be used not only on Talkeetna rocks, but also on plagioclase peridotites worldwide (Trinity and Josephine ophiolites, Kane Fracture zone peridotites (see (1), below), and many others.

Comparing relationships between topography and seismicity in compressional and extensional settings.